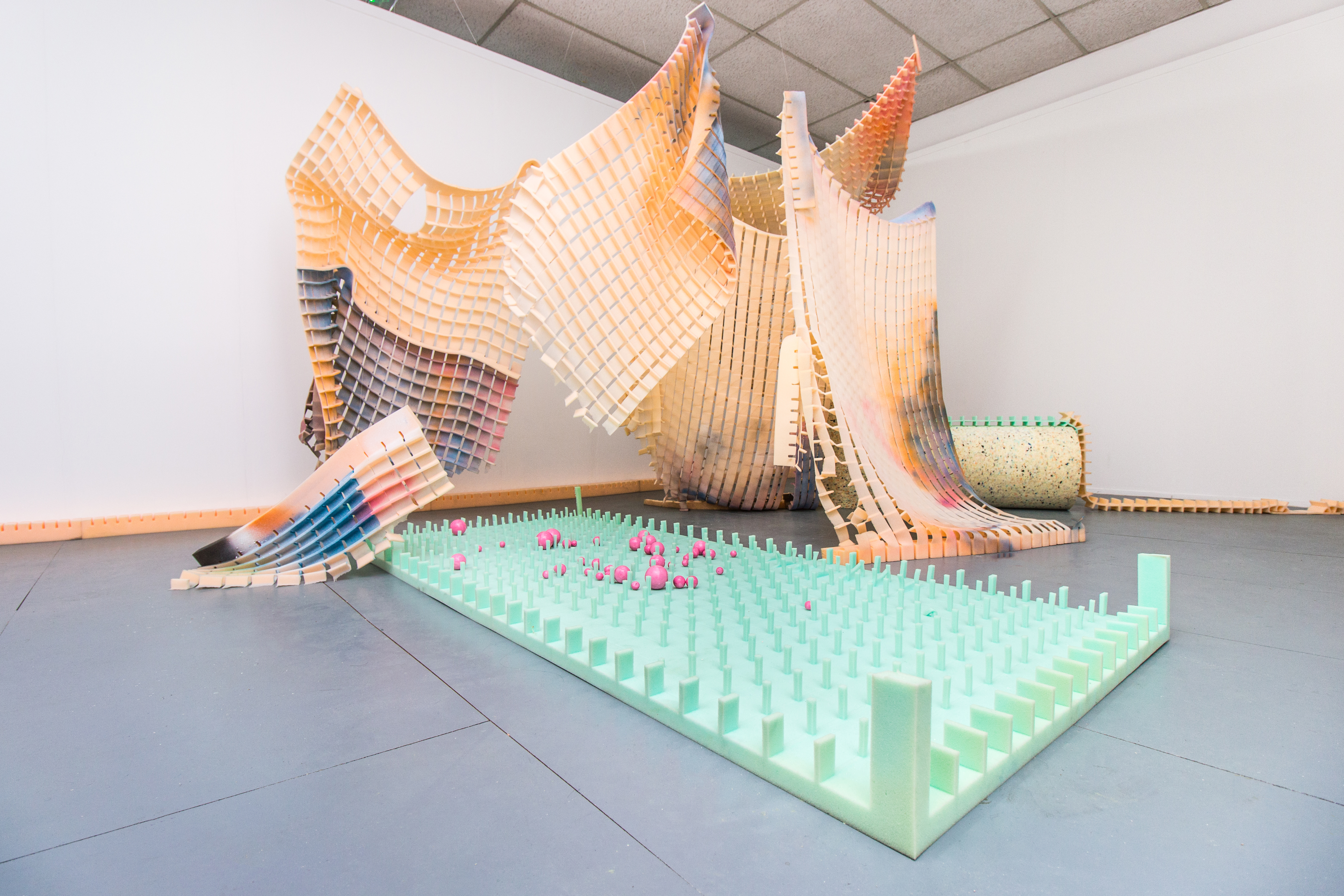 The nature of this collaboration at Abingdon Studios Project Space (ASPS) was to provide exceptional opportunity for presenting individuals works in new and unexpected ways. The Abingdon Experiment aimed to create an immersive space where objects come together and investigate themes of allowance and control and the vitality and agency of matter, whilst addressing the issues of assemblage and complexity in a collaborative zone.

In March 2017, Tomlinson and Bramley exhibited together in the industrial gallery space of S24 in Leeds. There had been movements in both practices in terms of form, colour and materials as well as the combination of these elements now demanding further conscious collaborative space and time.

The collaboration was not expected and exciting to both artists? practices who agreed that this was a process to be further pursued and developed. In efforts to continue evolving themes, the artists have since exchanged ongoing photographs of work and sent each other works described as ?unfinished? by post and allowing their counterpart to ?complete? or develop. An excellent body of work is culminating.

We do not live close to one another and do not know each other personally – we have been introduced as artists who have developed along similar trajectories?

Both artists began as painters and have moved into investigating the liminal space between painting in the expanded field and sculpture. Their practices both compliment and contrast with each other as they attempt to find a balance between artist led intervention, networked assemblage and the agency of materials.

Underpinning Polly’s sculpture and installations are a fundamental search for something through action, grappling with materials and manipulating until a kind of truth or realisation is released during the process, allowing the intrinsic properties of the material to arise. The work avoids obvious connotations and is non-representational; it is, ‘about sculpture’.

Polly enters into a mental dialogue with the material as to what is required and the process allows her to move beyond metaphor and into something more directly experienced. She is in a place of ‘flow’ is and completely absorbed in the making of the work.

Influenced by the human body and how it leaves a memory of its action on the material, the work is physical and confrontational. Polly both isolates and absorbs herself in the making process to allow the materials to dictate their form. She is keen to find out about the materials and what they need on one hand, whilst controlling them on the other; this balance is central and sought.

Polly is concerned with the expansion of taste. Taste in terms of what can be accepted in the making process, and what cannot. Within these concerns is an awareness of the potential space for creativity, the heightened idea of potentiality through the process of making. When is the mark or the action encouraged, nurtured and honed, and when is it eradicated or altered? Such a potential space is paramount in the work and occupies a place where language and communication occur.

Paul Bramley is an artist whose work is situated within both the expanded fields of painting and sculpture. His materials are often those of the building site or hardware shop, the discarded, the readymade, jumble and leftovers that are salvaged, recycled and repurposed to create ‘things’ – things that inhabit the threshold space between representation and non-representation. The selection of products such as used sandpaper, decorator’s rags and copper piping acts as an index of the lived labour; an indication of the subjectivity of the artist, providing a valuable resource pool for art practice adding a personal narrative to the work.

Paul has a long-term fascination with displacement and deterritorialisation and his repurposing of materials not traditionally associated with the fine arts is symbolic of a wider interest in the cultural and economic ramifications of globalization. The notion of not belonging to a fixed territory, but to shifting territories is of central importance to Paul’s practice, allowing him to make medium-unspecific work, moving quickly from one contrasting set of materials to another, working with whatever resources present themselves.

The provisional nature of the assemblage methods in the work is significant in that it is emblematic of both the complexity and potential of human agency. The wrapping, knotting and binding act as ciphers for the extraordinary contemporary narratives brought about by the cultural and spatial displacement of subjects. The work focuses on the human need for identification and the consequences that a redefinition of formerly pre-established identities can bring.